We didn’t have any early plans today, so we just woke up naturally. We were out of the hostel by about 10 and headed to the train station to get a 72-hour subway pass. When we got there, they told us that they didn’t sell the tourist pass at that station. They directed us to the Iwamotocho Station which was a 20-minute walk, so we headed in that direction. When we got there, we went to the ticket office and asked if they sold the tourist pass. Turns out this station didn’t sell it either, but they told us to go “big camera” outside the Akihabara station. We mapped ourselves to Akihabara Station (a 10-minute walk) for our 3rd stop that morning. That felt like good advice until we got back to street level and didn’t see a “big camera” anywhere. We arrived at the station which was bustling with shops and loads of people. We finally found what looked like a big camera store and asked if they sold the pass here. The woman at the information desk finally corrected us that we had to go to “Bic Camera” which turned out to be a huge electronics store (really an “everything possible” store) a few blocks away. We got there and finally, they were able to sell us the subway pass! After we bought the pass (1,500 yen per person for 72-hours), we decided to wander around the store for a bit. We found banana and cherry blossom Kit-Kats along with many other awesome, unique flavors. I don’t understand why we only get the boring chocolate Kit-Kats in the States, but we will definitely order these flavors again after this trip. We also went up to the toys and games section of the store and found a huge section dedicated to the 2020 Olympic games in Tokyo. Even though we aren’t going to be here during the games, we thought it would be cool to get some small, authentic memorabilia since we are at least in Tokyo. After the unexpected shopping trip, we got on with our plans for the day. 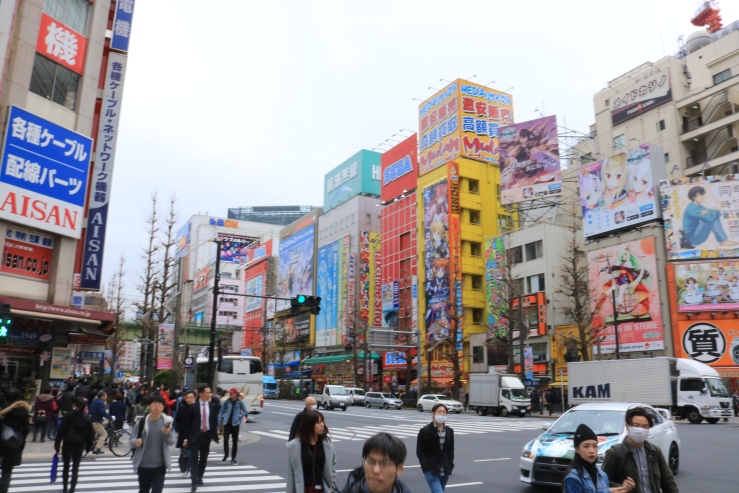 Our first official stop was lunch. We had been told that we couldn’t leave Tokyo without getting ramen at a place called Afuri. They have gotten so famous that they actually opened up multiple locations, even in Portland. So, if you want to make a shorter trip to get amazing (but not AS amazing, we’ve heard) ramen, that might be the move. When we got there the line was already halfway around the building, but we knew it was worth it. It wasn’t too bad of a wait, probably 45-minutes, but definitely worth every second. Once inside, you order using a vending machine that spits out a ticket order for you to give to the chef. You pay through the machine which allows you to get up quickly after you are done eating, without the process of waiting for a check. I got the traditional soy sauce ramen with pork and Haley got spicy yuzu ramen (a surprising acidic/citrus flavor in the broth) with pork that was truly one of a kind. That was hands down the best ramen we have ever had. If you come to Tokyo, you definitely cannot leave without going here. We are also curious to go try the location in Portland someday to see for ourselves how it compares. After lunch, we walked over to a famous shopping street called Takeshita Street in Harajuku which is known for being packed with clothing shops and cafes. It was fun to see the crowds and stores, but it was so packed with people you could barely walk through it. Honestly, I don’t think we would go back if we visited again. Once we got to the end of Takeshita, we walked to Kat street which is known for vintage clothes and accessories. We wandered that street which was fun but totally out of our price range so we didn’t spend a whole lot of time there. After our window shopping experience, we were ready to go back to something more our speed. 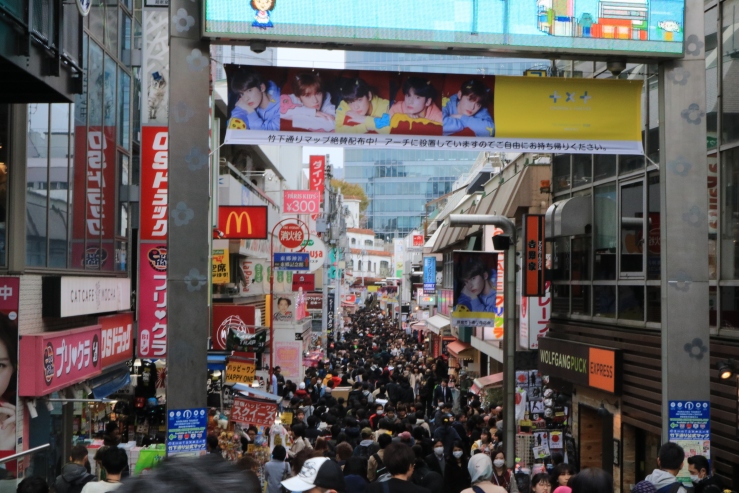 We walked to Yoyogi park which is known for its cherry blossom viewing. We got there and were met with huge crowds of people picnicking under the cherry blossoms just like they were in Ueno park on our first day here. We walked through the picnickers taking in the views. Yoyogi park is really cool because it was the site of the Olympic village during the 1964 summer games. As we walked through the village, it looked like they were building new buildings and a new stadium possibly for the 2020 games. We sat on a bench to relax and people-watch for a while. As it got dark, we left the park to go get dinner. 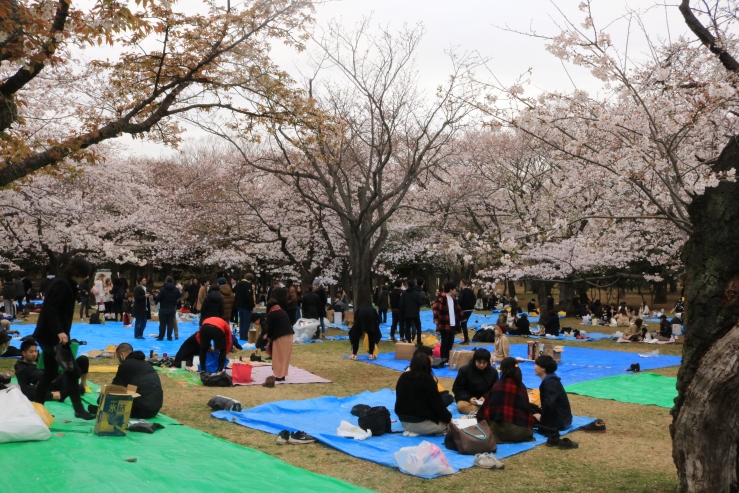 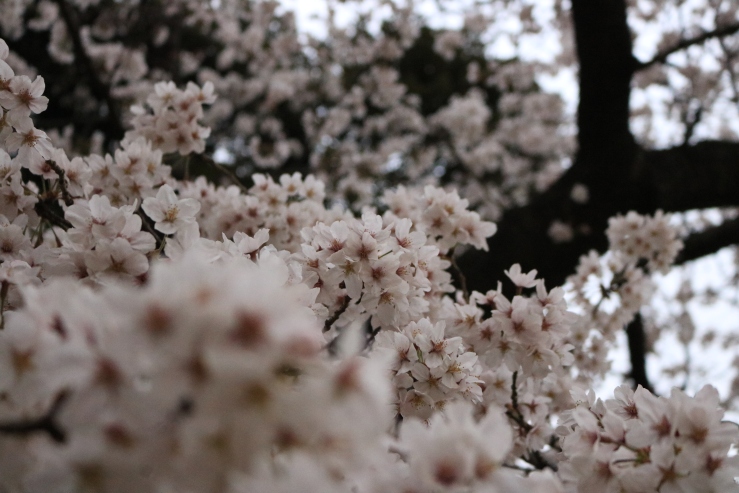 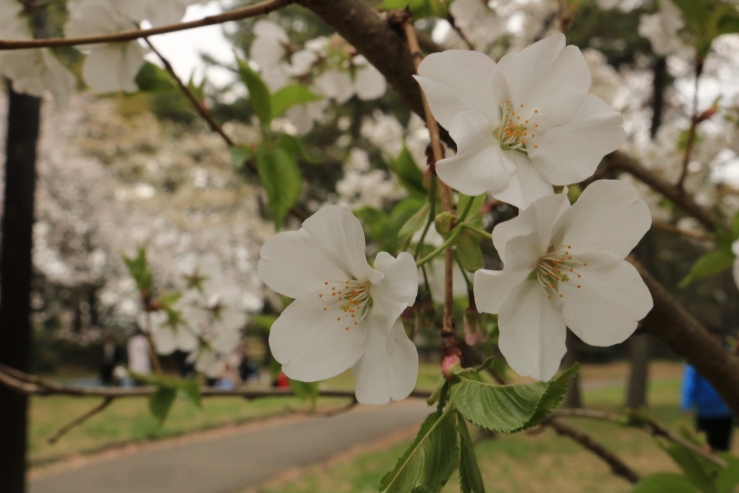 For dinner, we found some “Kaiten sushi,” or conveyor belt sushi, which we had heard all about on videos and from people in the hostel. We headed over to Shibuya Station where the famous Shibuya crossing is. It was nuts to witness because when the crosswalks are red and you are looking at the four distant corners, it doesn’t seem like that many people are waiting. But as soon as they turn green, the street becomes flooded with so many people that you can’t see a single sliver of light in between the crowds. It’s amazing that everyone is able to get out of the street before the crossings turn red again. After watching the crossing, we walked a few minutes to the nightlife area of Shibuya that is filled with restaurants, arcades, and bars. We found the sushi place and, luckily, got there before a huge line formed. We waited for maybe five minutes and then got seated. This might have been the most fun we have had at dinner in a long time! We sat down at a bar with two Ipads in front of us with options of sushi. All you do is tap which ones you want, confirm the order, and in seconds a train comes down the conveyor belt with your order on it. The sushi ranges from 119 yen to 500 yen ($1-$5) for two pieces of nigiri (slice of raw fish onto a little bed of rice). It was so much fun to scroll through the options and pick out what looks good and have it arrive in seconds. Granted the knife cuts were not the best and the rice was just okay, but you get what you pay for and for a dollar we were perfectly happy. The fish still tastes fresh and delicious, so this is a perfect way to get sushi in Japan without spending a whole lot of money. After several plates and a few beers, we were stuffed. When we got up to leave, we were expecting a small line like the one we had waited in but we looked out the window and saw a mass of at least 50 people waiting to be seated. There were signs on the table that said during busy hours, guests that have been here for more than an hour may be asked to leave and now that made total sense. After dinner, we walked around the streets for a bit with no goals or plans but to walk off dinner and take in the sites of late night, Shibuya. We wandered around for maybe 20-minutes and then decided to call it a night. We hopped on a train back to the hostel, had a nightcap in the hostel cafe, and then headed off to bed. 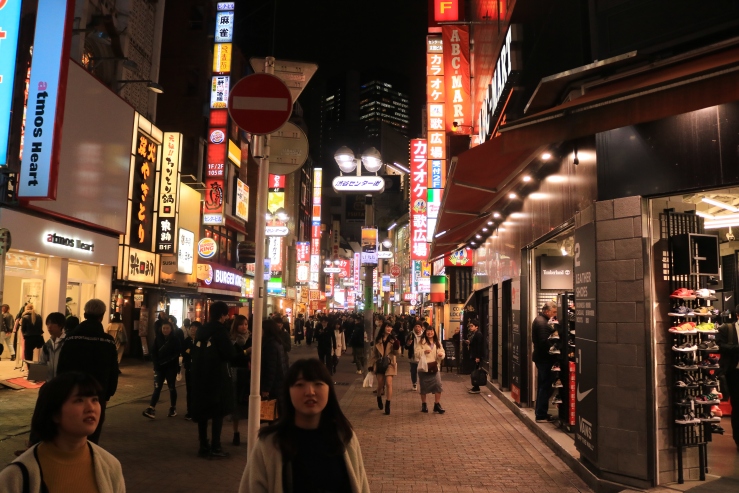