We decided that we should get up a bit earlier today after finding out that this whole town shuts down at 5. So, we were up and out of the hostel by 8:30. Our plan for today was to spend most if not all day at and around Lake Ashi. Luckily, Hakone has a two-day or three-day pass that tourist can buy that includes all of the city buses, cable car, ropeway, sightseeing cruises, and trains. The first stop on the way to the lake was the Hakone cable car. This took us from the main train station, straight up mount Hakone for 1.3 kilometers (8/10 of a mile). Once we reached the summit we boarded the ropeway (basically an 18 person gondola) that took us up to Owakudani, an active sulfur volcano. On the way up to the mouth of the volcano, we had breathtaking views of the valley and surrounding towns. The mountains were covered in lush trees that gave them a fluffy look that seemed inviting. We got off the ropeway at the mouth of the volcano and watched the sulfur gas pour out of the rock. While we were up there, we bought the Owakudani specialty, black eggs, which are eggs boiled in sulfur water. The sulfur and the eggshell have a chemical reaction that turns the shell jet black. Unfortunately, or fortunately (depending on how you look at it), once we peeled the egg it was just like any other hardboiled egg with maybe the slightest hint of sulfur smell. It was hard to tell if that smell was coming from the eggs or the active volcano right behind us! After our snack and some photos, we got back on the ropeway to descend towards Lake Ashi. On the way down to the lake, we were greeted with our first sights of Mount Fuji. It was even more impressive than we could have imagined. It just came out of nowhere with its stunning white peak and towered over all the surrounding mountains making them look like insignificant hills.

We got off the ropeway and were immediately met with a huge line for the sightseeing cruise. This was not an ordinary cruise, these cruise ships were pirate ships (included in our Hakone free pass)! They were decked out in vibrant colors, sails, masts, and the whole nine yards. Thankfully, they had modern motors on them so we didn’t have to rely on the wind to get us across the lake. After waiting in the line and getting on board, the trip across the lake took about 20 minutes where we had gorgeous views of the lake and the surrounding mountains. Unfortunately, at this point, Mount Fuji was hidden by the closer mountains, but we were hoping that we could get a little more elevation once on land again and get some stunning views. We docked at the far end of the lake where there was a small town with gift shops, restaurants, and coffee shops. We wandered around for a bit trying to find a place to eat lunch, but all the restaurants were pretty crowded with other tourists that had gotten off with us as well as ships before us. So, we left town and headed to the Imperial Family’s old summer home that was now a park as well as a Mount Fuji viewing area. We had an easy 15-minute hike to the high point of the peninsula where we got some great views of the mountain. Sadly, the sky was a pale blue and Mount Fuji was still snow-covered, so if you weren’t looking closely you could mistake it for a big cloud. After taking in the views, we headed over to the other port that the cruise ship stops at to head back to the start of our cruise. 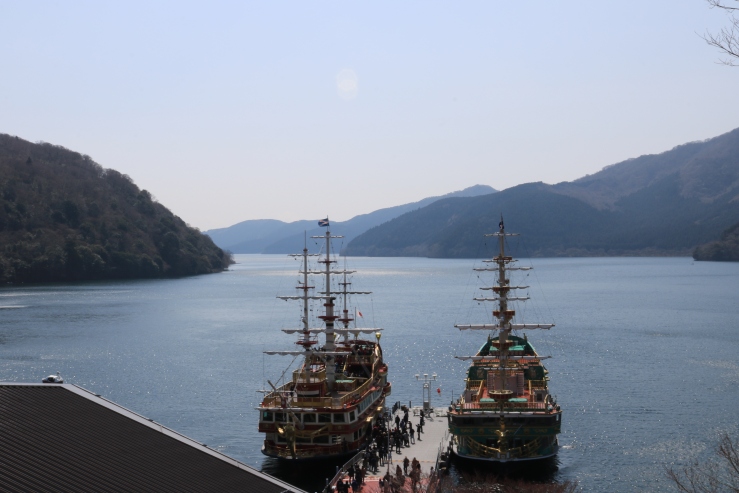 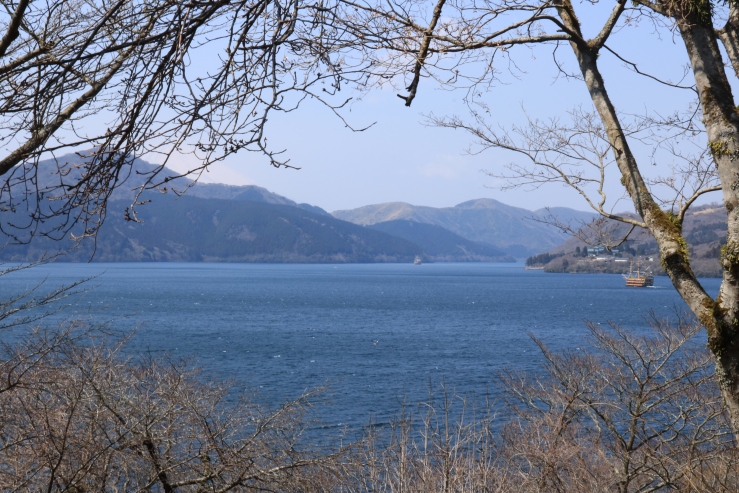 Once we got back to the home port we walked up to the ropeway line and waited to head back towards home. By this point, it was probably 3 o’clock. We knew we didn’t have much time to play around with because the trip back was going to take at least an hour and we didn’t want to cut it as close as we did yesterday. We boarded the ropeway at about 3:30 and we were feeling good, but at the midway station the operators told us we had to exit the car. Apparently, at the top of the volcano, they were having 50-60 mile per hour winds which made riding the ropeway unsafe. At this point, we were getting a little worried about our time so we had to act fast. Haley mapped us a bus to the hostel but the closest bus stop was back at the base of the ropeway. We ended up walking down the mountain on a super old, rocky path that winded through the woods. If we weren’t worried about getting back to the hostel before the buses stopped running, that would have been a really cool trail. We finally got the bus stop and now we could settle down again because we knew we would be fine.

After we got back to the hostel, we walked to a local gyoza restaurant that our hostel owner couldn’t stop raving about. We had a variety of dumplings including pork, crab, and shrimp. They were very tasty, but they were not even in the same ballpark as the Kyoto gyoza bar. As we worked our way through them, we were saying how these really put into perspective how good the Kyoto bar was and just reaffirmed that the 2 1/2 hour wait was totally worth it. After a still delicious and filling dinner, we walked to the local 7/11 to buy some beers and headed back to the hostel to watch some tv and get ready to pack up and head to Tokyo tomorrow!