Today, we left the hostel at 9 and set off for the Museum of Traditional Crafts. When we got there, we realized that the building housed much more than just the traditional crafts museum. We wandered around until we saw some signs pointing us to the basement. The first thing you see when you get to the crafts museum is the gift shop. We both looked at each other and thought, “is this the museum?”. To our pleasant surprise, after we got through the extensive gift shop, we had made the right turn into the museum. Each room was small and seemed to be the end, but the further you moved through the museum, the more rooms you discovered. Hallways bent into more rooms, and the single floor museum extensively showcased the process of at least 20-30 forms of craft. One of the coolest things about the museum is that they had live demonstrations throughout the exhibits. They had a guy laying gold leaf on the legs of a household worshiping table. There was a woman using a foot pedal lave weaving an intricate butterfly onto cloth. You could tell she was dedicated to her craft because the fingernails on her pointer and middle fingers on her left hand were grooved so she could push the thread tight before weaving the next line. There was also a demonstration of how they braided the belts that are worn with kimonos. My personal favorite was the lave because of the woman’s dedication to sharpen her fingernails like that. Haley’s favorite was the gold leaf because when he was delicately laying it down it looked rough like wrinkled paper. But then, he took a brush and lightly brushed off the excess and it instantly turned smooth. The flakes of gold dust fell into a collection box for later works. All in all, we were pleasantly surprised at how much we enjoyed the exhibits and demonstrations, and we were glad that it wasn’t just the gift shop.

After the museum, we headed over to the Kyoto city zoo which was a short 10-minute walk away. We were hoping there would be some unique animals there that we had never seen, but it turned out to be a bit of a bummer. They had really common animals like mallard ducks, deer, and squirrels which surprised us Midwestern Americans. Secondly, the cages they had for the big cats were so tiny it made our bunk at the hostel seem spacious. At least half of the space was wire floors, which couldn’t feel good on their paws. For reference, picture a wire McDonald’s playhouse, and you can imagine the size and layout of the cage. One cage made us particularly sad. The identification of the lion described in English and Japanese how he was very old and sick; he was unable to eat and had limited mobility. The lion looked as if he only had weeks left, his bones and ribs protruding from starvation and his fur clumping and falling out. The zoo assured us that they were doing what they could to make him comfortable, yet staring at him through the glass still felt wrong. Honestly, we were pretty saddened and underwhelmed by the whole experience and decided to leave halfway through to go get some lunch.

For lunch, we didn’t have a plan so we just walked in the direction of our next destination and figured we would find something along the way. The restaurant we decided to try was a soba noodle place where they give you a bowl of hot broth and a bowl of noodles and a small empty bowl where you combine them as you go. I got a beef and onion broth and Haley got a fried tofu broth. They were both just okay and again we found ourselves somewhat disappointed in our choice. We left the restaurant hoping that the rest of the day would be as good as the museum was.

The next stop was Maruyama Park which had at least a dozen individual shrines and temples. There was a worship path that we followed that took us from shrine to shrine. This park was particularly cool because the temples and shrines were still being used for services and worship. Most of the shrines that we had gone to before were world heritage sites or very old so access was restricted, but here there were locals coming to pay respects, light incense, and worship. We were able to get a glimpse into what everyday practices looked like without disturbing their worship. The entire park was beautiful and our day was on a positive track again. After wandering around for a while we moved onto the last sightseeing stop for the day. 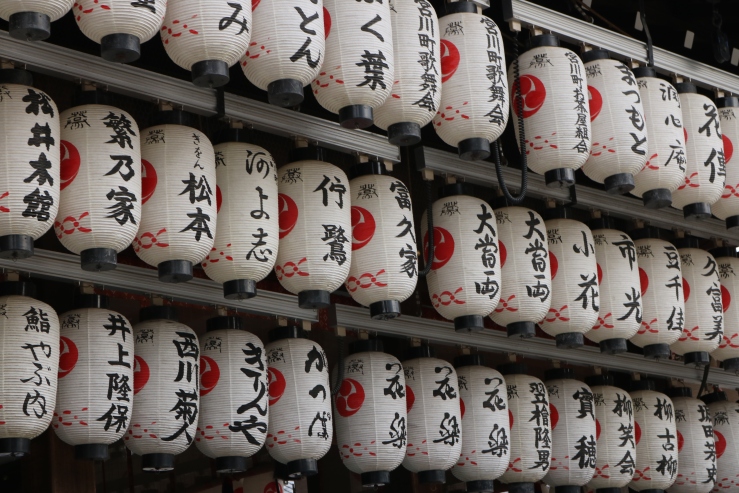 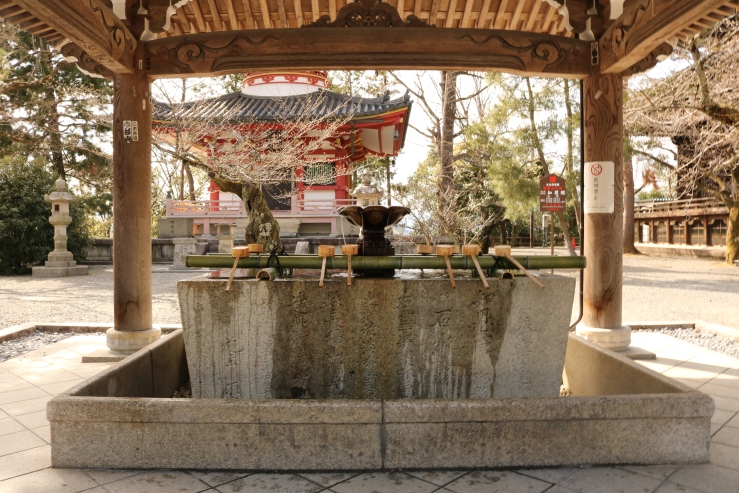 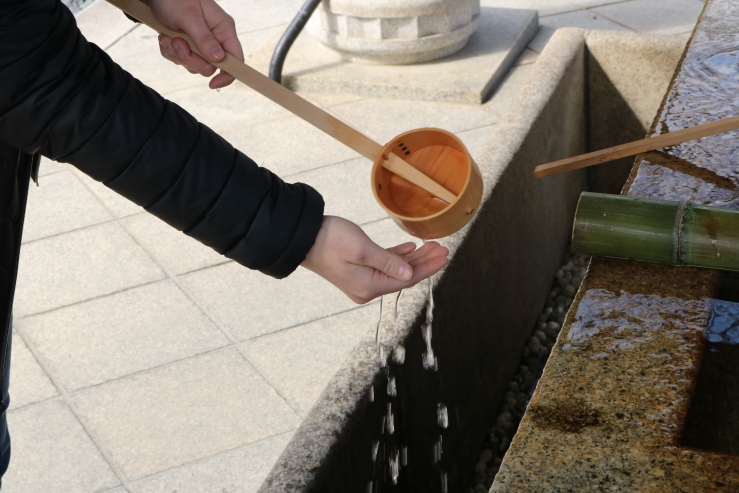 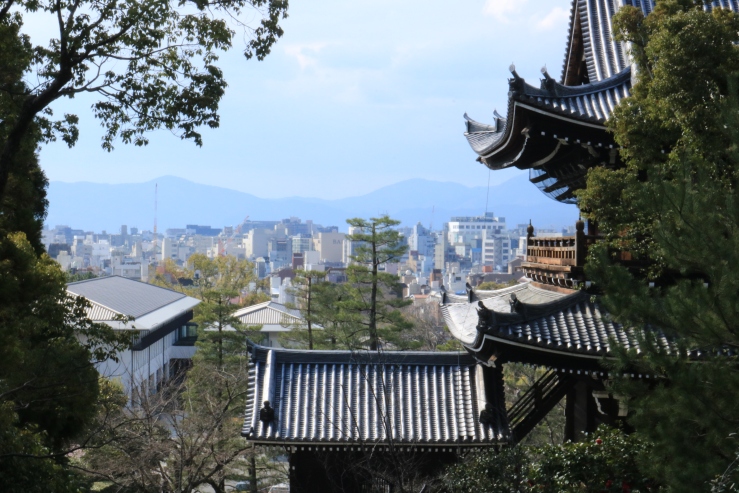 Our last sight was the Kiyomizu-Dera, a temple on one of the highest hills in Kyoto. The road up to temple was lined with traditional style shops and houses. On the way up we stopped to get some steamed buns and matcha ice cream to refuel and then returned to the hike. Once we finally got to the top, we were rewarded with a stunning orange temple that was so big and bright I was surprised we couldn’t see it towering over the city the whole time. From the temple grounds, we got an awe-inspiring, 360 view of the entire cityscape. After we took in the impressiveness of the temple and surrounding structures, we headed down the hill to the Gion district where we wanted to visit the bar that our friend Nabe recommended to us (and yes his map was spot on). 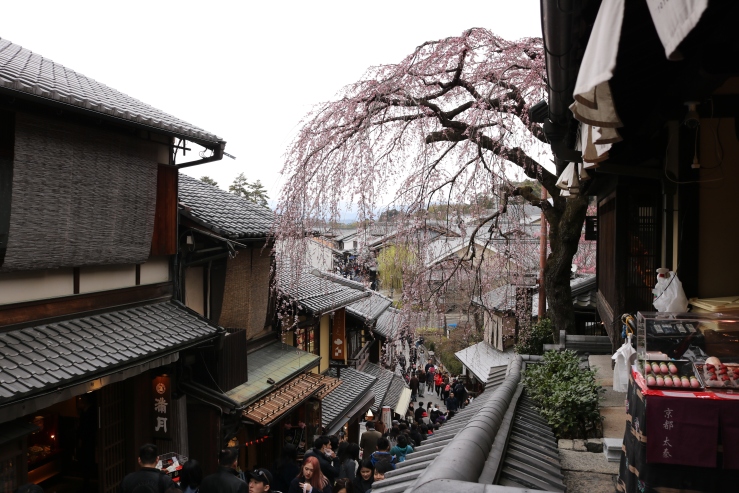 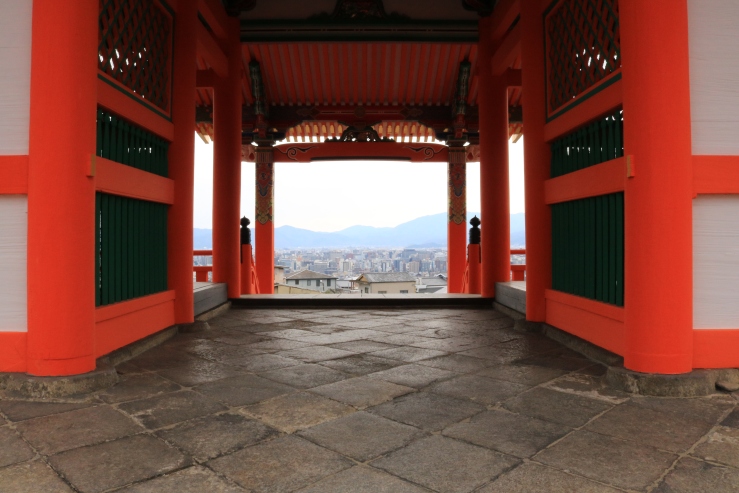 The common one bar might have been the coolest bar I have been to. The entrance felt like we were walking into a garden. It had a stone path surrounded by perfectly manicured grass and flowers. We were greeted at the door by our bartender who took our coats and sat us at the 15 seat bar. We asked him to make us whatever he wanted and to make himself one as well. He seemed surprised that we knew the tradition but happily made himself one. First, he made us a Japanese gin and tonic and took as much care with every element as Nabe did. Then he made us a Negroni with Japanese whiskey. Finally, he made us a cherry blossom flavored drink that we never figured out the name of. While we were at the bar we met a Norwegian couple that just got to Kyoto, so we shared our favorite sights and spots to eat and they did the same for us with Tokyo. After our 3 drinks, we called it a night at the common one bar and started our 50-minute walk home. We couldn’t decide what we wanted to eat for dinner and didn’t want to hang around Gion much longer because it was getting late and we had a long walk home ahead, so we figured we would find some food closer to home. Every day, we passed a local pizza place called “Pizza Litte Party” which made us laugh every time and became a marker of being close to our hostel. After our somewhat disappointing lunch, we decided to go for it. We ordered the Italian special with fluffy crust, rather than crispy or regular. It was delicious and very satisfying after a long day of walking. After our “traditional” Japanese dinner, it was time for bed. 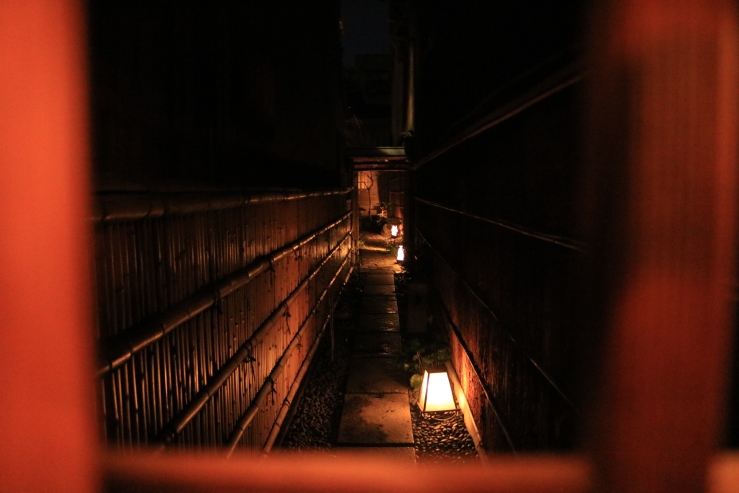